"Popo, you will never be forgotten because we promise to do our best to live life with your spirit. Forgiving, letting the bad stuff go, generous of love, and free of ego." Granddaughter Adrienne Chuck

Sau Chun Wong Chun, was a remarkable woman in many ways. Until just two months before she passed peacefully on May 7, 2020 at age 104, she was still swimming at the Nuuanu YMCA, playing ukulele, attending Sunday service at the Community Church of Honolulu, and sharing her love with others. Sau Chun (meaning "longevity" and "pearl" or "precious") Wong was born in Liliha on October 13, 1915. She graduated from McKinley High School and earned a degree in Education from the University of Hawai'i at Manoa, but her lifelong passion was to improve relations between the United States and China. As a result, Sau Chun had many professions and excelled at all of them. First, she was an educator, teaching at a school in Massachusetts, and in Hawai'i at Pahoa, Hilo and Kahuku Intermediate Schools and at McKinley High. Later, in Hong Kong, she also taught at the True Light and Pui Ching middle schools. Throughout her life, she continued to volunteer and tutor students.

She married Walter Chee Kwon Chun in 1950, and the idealistic young couple moved to Beijing, China, to lend a hand in rebuilding that war-torn nation. There, Sau Chun gave birth to first Ping (son) and then Yen (daughter), while working as a journalist. During the subsequent 11 years, the Chuns had the unique opportunity to experience first-hand the tumultuous changes in the New China, including famine and the Great Leap Forward. Sau Chun regarded these years of challenge and hope as the highlight of her life.

In 1961, seeking more access to family and modern facilities, the couple moved to Hong Kong. There, Sau Chun taught high school for a few years, and then served as executive assistant to the CEO of the popular Wing On Department Stores in Hong Kong.

In the 1970s, she and Chee Kwon founded a US-China consulting company to help Fortune 500 companies do business in China.

By 1987, her first grandchild Jonathan was born in Hawai'i, and the Chuns finally came home.

But China was still in their hearts. Sau Chun became a co-founder of the Soong Ching Ling Foundation USA, served as a trustee, and was instrumental in establishing Hawaii's sister-state relationships first with Guangdong and then Hainan Island in China.

In 2009, the Chuns were honored by the Dr. Sun Yat-Sen Hawaii Foundation and the Honolulu City Council with a Lifetime Achievement Award for promoting US-China understanding, friendship and trade. In addition, the Chuns were giving and believed in education. Over the years, they funded numerous school and college projects in China and the USA. In 2012, Sau Chun and her daughter Yen set up an endowed scholarship fund for McKinley High School graduates to attend the University of Hawai'i.

A celebration of life will be scheduled later. Remembrances are being accepted by two organizations dear to Sau Chun: 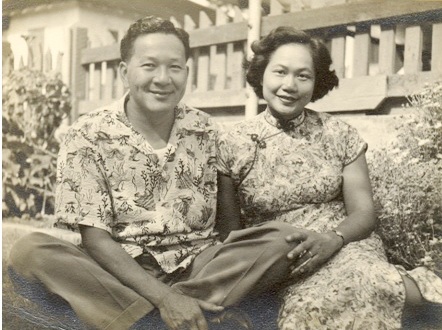